Now that Major League Baseball has finished handing out all its bronzed and emblazoned knicknacks to players who helped their teams win divisions and games and what not, we can turn our attention to honoring the best player on our favorite team.

To be sure, after a season where bright spots were often as rare as talent on the set of The Jersey Shore, picking a player who made watching the games a pleasure was tough. Sure Liriano's no-hitter was a treat to see, and Jim Thome's jaw dropping taters were amazing (both for us fans and the guys on deck--see Young, Delmon). But if you were to ask us who made watching the games and tuning in on a daily basis worthwhile there really is only one answer.

So congratulations to our 2011 Peanuts from Heaven Most Valuable Peanut:
MICHAEL CUDDYER.

Now, some might say that this is the easy way out. After all, Cuddyer was the Twins' All-Star representative and yeah he lead the team in Slugging, OPS and WAR and yeah...he's freakin' Michael "Magic Man" Cuddyer. But there's more than that. When Cuddy came to bat we had sudden, inexplicable surges of optimism. No matter where he played--Right field, First Base, Second or Third--we couldn't help but appreciate the all out effort on every play. We actually kept hoping he'd suddenly end up pitching....then he did.

So there's Cuddy, hitting, fielding, pitching, helping with team broadcasts, blogging on the side, raking the infield dirt and doing everything short of playing Baby Elephant Walk on the organ. How do you not love a guy who does all that? Heck, what else could Cuddyer do at that point?

Well...he could do it all...in a foreign country, during a mid-season excursion with we bloggers to Thailand. And sure enough, he did it all again.


That's how good Michael Cuddyer was this year. He was the best Twins player on two continents. So, on today of all days we have to be sure to be thankful to have seen Michael Cuddyer at his very best this year. Bravo Cuddy, let us know where to send the hardware.
Posted by The Scruffy Rube 1 comment:

Where have we been?

Clearly our priorities are all messed up. There's been much baseball news and major Twins stuff and what have we peanuts been doing?

Well for starters we've been grooming our newest intrepid reporters: they'll be with us all off season and into 2012, and what they lack in opposable thumbs they more than make up for with adorableness. 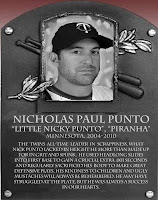 Secondly, we're still coming down off the shocking revelation that Nick Punto is a World Champion. Yes, last year's Peanuts from Heaven Hall of Fame inductee is now one of the few proud people who can call themselves "the best in the world". Granted, Nicky P wasn't exactly the most dominant hitter in October (or any other month for that matter) but after helping his team win one of the best Game 6s in baseball history and celebrating on the Busch Stadium infield dirt, he deserves his moment in the sun and we're all too happy to give the man his due. So raise your glasses Twins fans to Little Nicky Punto: the quintessence of "scrapitude".

Thirdly, we had about a two week period where we were literally dumbstruck at the news that Bill Smith was no longer GM and Terry Ryan is back in charge of the Twins on-field personnel. Bill Smith's been in charge ever since we started this blog, and while we've had our share of fun at his expense, we want to make sure that we give credit where credit is due. Bill Smith ran an actual, honest-to-goodness, real-life, major league baseball team that won many games, made many people happy and ensured that the sideburn-ed one would remain in Twins colors for the forseeable future. We always felt as though he wasn't quite as confident in the job as others were, but hey--he allowed us to keep making references to VH1's "The Pick-up Artist" so thanks for that Bill Smith! Meanwhile, we're happy to welcome back Terry Ryan, who may not be as easily photoshopped into compromising situations--but may just have the genius to get us out of the mess we seem to have fallen into.

Finally, we've been trying to find a good joke to make about Jamey Carroll, the Twin's latest free agent signing and (apparently) probable starting shortstop. There's the fact that both his first and last names are somewhat feminine, but we'll leave that pithy observation for those on their eighth Grain Belt in the fifth inning of a mid-June game. There's the fact that he's as Opie-looking as Adam Everett and older than Mike Lamb, but that's a little fatalistic and dour as we try to be peppy this off-season. Sure, Carroll could crater and leave us 7 million in the hole or he could be merely average as we mark time until something better comes along. But let's be optimistic: welcome to the Twins Jamey Carroll! May your on-base percentage be consistent, may your defense be a marked improvement over last year and may you grudgingly accept our goofy well wishes.

We'll be back again soon with an off-season blueprint, a ballot for the Peanuts' Hall of Fame and a new award to hand out.

Ps. Right after we posted this Ryan Doumit was announced as a new Twins' signee...theoretically the ex-Pirate will be able to combine with the Dread Pirate Joe Nathan to form a fearsome, swashbuckling battery.
Posted by The Scruffy Rube No comments: